At what point does the shrinking difference no longer justify the move?

But wait… the Exodus for the Sierra Nevada isn’t driven by savings.

People’s reaction to the changing work environment during the Pandemic, particularly to the sudden explosion of unemployment and the switch by major companies and government entities to working from home, have thrown the apartment market into total turmoil, with people leaving large expensive city centers and moving to distant locations, or just moving further afield into smaller towns or the mountains. This shows up in plunging rents in those expensive cities and in soaring rents in the move-to areas. This is precisely the scenario in the San Francisco Bay Area, where a massive shift in rents has played out.

In San Francisco, the most expensive rental market in the US, the median asking rent for one-bedroom apartments in March remained at the multi-year low of $2,650, down 29% from June 2019, according to Zumper: 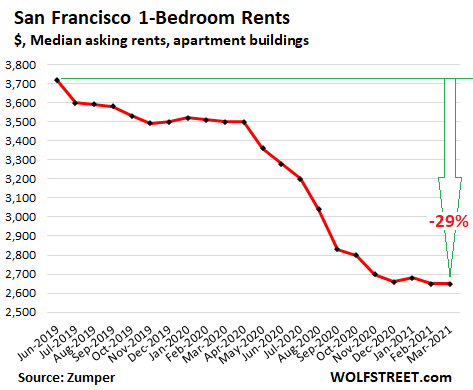 What everyone wants to know: Has this move gone as far as it’s going to go, 12 months into the Pandemic? And will some or all of it reverse as people come to their senses and move back or whatever? There has been intense speculation and feverish hopes at every twist and turn.

In Silicon Valley… In San Jose, the third-most expensive major rental market in the US, the median asking rent for a 1-BR apartment dropped 3.7% in March from February to $2,100, down 18% from the peak in July 2018. In San Mateo County, 1-BR rents were down 19% from a year earlier.

“Asking rent” is the advertised rent but does not include concessions, such as two months free. “Median” asking rent is the middle: half of the asking rents higher and half are lower. Zumper’s data covers apartment buildings and new construction, but not single-family houses for rent or condos for rent. Zumper collects this data from around 1 million listings on Multiple Listings Service (MLS) and other listing services, including its own listings.

In Fresno, the median asking rent has surged by 18% since July 2019. The city is in San Joaquin Valley, a primary agricultural region in California. It’s a three-hour haul by car to San Francisco. But it’s close to Yosemite National Park, Kings Canyon National Park (just 1 hour), Mt. Whitney, and other marvels.

At what point does the shrinking difference no longer justify the move?

That’s a question that many people are asking when they make the move to a city like Sacramento or Fresno.

But people have other reasons to move… a passion. Once you no longer have to show up at the office except occasionally, why not move to where you really want to move to, even if it doesn’t save a lot of money, or any money.

In Placer County, the median asking rent for a 1-BR apartment has skyrocketed by 30% year-over-year. The county reaches from Sacramento across the Foothills into the Sierra Nevada to Truckee, the northern part of Lake Tahoe, and the Nevada state line. It includes cross-country and downhill ski areas.

This has become a red-hot move-to area for people in Silicon Valley and San Francisco. People go skiing for a couple of hours and then return to their Zoom meetings and coding with a huge smile on their face. That’s hard to beat as a work environment.

In El Dorado County, the median asking rent has soared by 20% year-over-year. The county is just south of Placer County, reaching from Sacramento across the Foothills into the Sierra Nevada to the southern part of Lake Tahoe and to the Nevada state line. Ski areas in the winter, gorgeous hiking areas, such as Desolation Wilderness, in the summer.

People who work from home have the liberty to live where they want to live, either to be able to exercise a passion, or to save large amounts of money on housing – or both! And they all do their math and struggle with their own equations, unless it’s an impulse decision to be challenged by reality in short order, and that too is happening.

But at some point, as the price differential narrows, the equation changes, and decisions change. And every landlord in San Francisco and in Silicon Valley is now looking for signs that people are coming to their senses and returning to the big expensive cities. And by the summer, some employers may require that some of their employees to show up at the office four or five days a week. But for now, the rental data shows that the exodus has not reversed.